Quartz may either be transparent, translucent or opaque. Pure quartz is colourless but ranges from white, purple, pink, blue, green, yellow, orange, red, brown, black or grey in colour due to trace amounts of other elements, or the inclusion of other minerals.
Formula: SiO2
Hardness: 7
Origin: Worldwide

The word quartz is derived from the German word “quarz”, first published in 1505 as “querz”. 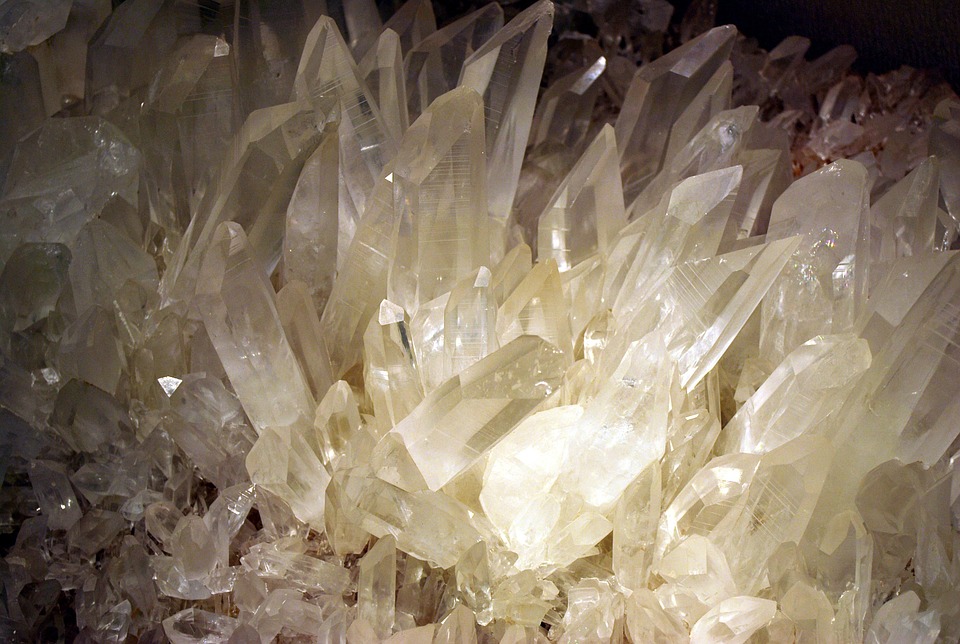 Quartz is the natural crystalline form of silicon dioxide (α-SiO2) and is one of the most abundant minerals on the crust of the earth. It is a significant component in many igneous, metamorphic and sedimentary rocks. Quartz crystallises in a range of crystal sizes, generally classified into macrocrystalline and cryptocrystalline varieties (see below).

It is probably one of the most popular and well-known minerals and is found in an immense diversity, regarding its shape and colour, and is often found in association with other minerals. These minerals can either share the same environment, be included within the crystal, or growing on quartz as the matrix (see bottom of page).

Pure quartz is quite hard, transparent and with a glass-like appearance. Trace amounts of other elements can add colour to the quartz, and colour can be affected by temperature, pressure and radioactivity.

Quartz can be found as nodules (agates and geodes), crystals in fissures or veins, as the main component of petrified organisms (fossils) or forming sedimentary rock.

It is a stone that has been used by ancient man as tools, vases, ornaments, in jewellery and as a spiritual symbol.

Macrocrystalline Quartz – Is quartz that is made up of larger and more visible crystals and grains.

Cryptocrystalline Quartz – Also known as microcrystalline quartz, it is made up of much denser and compact aggregates of microscopic quartz crystals.

Examples: Agate, Chalcedony, Chert and Jasper (see below for varieties) 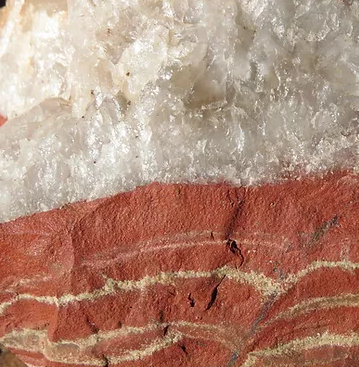 Varieties and forms of Quartz

Amethyst – A violet/purple coloured variety of Quartz. The colour is due to gamma irradiation and the presence of traces of iron built into its crystal lattice. Amethyst is found in many different forms.

Ametrine – A combination of both Amethyst and Citrine, often used as a gem stone.

Asylum Quartz – A very unusual variety of Quartz originating from the Democratic Republic of the Congo. Clear to smoky Quartz crystal clusters with various different inclusions. Some of these include red and black Hematite, Chlorite and needles of unidentified minerals. The inclusions may either be found as sprays, needles, blobs or as phantoms.

Aura Quartz – Aura is the name given to unnatural and enhanced Quartz crystals. These crystals undergoes an artificial process whereby the surface of the crystals have been bonded with vaporized trace metals. The more common colours are pearly, golden-yellow, green, pink and blue.

Aventurine – A variety of Quartz typically coloured green by the inclusion of Fuchsite. Yellow, red to brown (due to Hematite and Goethite) and blue Aventurine is also known, although the latter is a Quartzite and incorrectly referred to as Blue Quartz.

Blue Quartz – An opaque to translucent variety of Quartz, coloured blue by the inclusion of either Crocidolite, Magnesioriebeckite or Tourmaline.

Cactus Quartz – A variety of Quartz known from the Mpumalanga Province in South Africa. It has unique crystals that has secondary crystals that covers the prism faces of the original crystals. The original crystal with a vertical orientation and the second generation pointing outwards (horizontally). Cactus Quartz could be clear, light purple, smoky or yellow-brown covered in Limonite.

Citrine – A variety of Quartz ranging from pale yellow, yellow-orange to brownish in colour. This colouration is due to gamma irradiation and the presence of traces of aluminium.

Dumortierite Quartz – A variety of Quartz with the inclusion of Dumortierite, either coloured blue or with fine crystals included in the Quartz.

Faden Quartz – Is an unusual crystal structure also known as Tabular Quartz. It is a descriptive term for a tabular group of crystals with a white thread-like zone running through the middle of the crystals.

Fairy Quartz – Could be considered synonymous with Cactus Quartz. Fairy Quartz is generally finer and smaller in size. It has smaller main crystals and much finer secondary crystals, the crystals are often found on a fine crystal-druse plates, orientated in various directions.

Ferruginous Quartz – Quartz coloured yellow, red or brown due to the inclusion or covering of Hematite or Limonite

Hedenbergite Quartz – A variety of Quartz with inclusions of Hedenbergite, a mineral of the Pyroxene group. The crystals range from transparent light green to opaque and dark green in colour.

Hematoid Quartz – A form of Ferruginous Quartz, Quartz coloured red or brown by the inclusion or covering of Hematite.

Ice Cream Quartz – A form of Quartz found in association with various copper-ore minerals. It originates from the Democratic Republic of the Congo. Various Copper minerals including, Malachite, Cobaltoan Calcite and Plancheite covered with fine clear quartz crystal druse.

Limonite Quartz – A form of Ferruginous Quartz, Quartz coloured yellow to brown by the inclusion or covering of Limonite.

Milky Quartz – A milky to opaque white-coloured variety of Quartz. It is said that the milky or cloudy appearance is due to minute fluid inclusions of gas, liquid, or both, that gets trapped inside the crystal during its formation.

Morion Quartz – A form of Smoky Quartz in which the crystals are very dark smoky to black in colour.

Orange River Quartz – Referring to the origin of a group of Quartz crystals, ranging from clear, Amethyst, smoky to with Hematite phantoms, inclusions or covering.

Phantom Quartz – A crystal variety of Quartz that forms when another stage of crystal growth, grow over the pre-existing crystals, forming a crystal phantom of variable colour inside the crystals.

Pink Quartz – Or also known as Euhedral Rose Quartz, is a pink variety of Quartz with well-formed crystals.

Rose Quartz – A light to dark rosy-pink variety of Quartz that occurs in solid opaque to translucent masses. (Not to be confused with Pink Quartz)

Rutilated Quartz – A form of clear Quartz with the inclusion of Rutile needles, a titanium dioxide mineral.

Smoky Quartz – A variety of Quartz ranging from brown, grey to black (Morion Quartz) in colour. This colouration is due to gamma irradiation and the presence of traces of aluminium.

Spirit Quartz – A variety of Quartz known from the Mpumalanga Province in South Africa.

Typically Spirit Quartz has light purple (Spirits-coloured) crystals but can range from clear, milky to smoky.

Sunshine Quartz – Can either refer to the unnatural golden-yellow coloured Aura Quartz, or refer to the natural occurring yellow to brown coloured Cactus Quartz, due to the presence of Limonite.

Tiger’s Eye – A golden to red-brown chatoyant gemstone, a metamorphic rock with a silky lustre. Its appearance is due to the parallel intergrowth of Quartz crystals and altered Amphibole fibres that have mostly turned into Limonite.

Tourmalinated Quartz – Generally a clear to milky Quartz with inclusions of black Tourmaline. Both green and pink Tourmaline may also be inclusions in Quartz.

Tree agate – During the formation of white Quartz, green iron silicates flowed through it and deposited in cracks, resembling moss-like plant structures

Cryptocrystalline varieties and forms of Quartz

Agate – A term variably used, but in essence, a banded variety of Chalcedony. The volcanic and metamorphic stones (often nodules) are made of variably coloured layers of Chalcedony.  Agates could also have rounded eye-like patterns, dendrites and various other features silicified within.

Chalcedony – A term variably used, commonly to refer to the  cryptocrystalline Quartz varieties. This term is broadly used and often creates confusion. It is used as a general term to refer to the cryptocrystalline varieties of Quarts which include, Agate, Jasper and the other microscopic grained Quartz varieties. The term is also often used for botryoidal Quartz formations. Scientifically it is said that Chalcedony is Quartz that  is made up of aggregates of parallel grown Quartz crystals,  microscopic in size.

Chrome Chalcedony – A rare variety of Chalcedony, coloured green by the presence of Chromium. Material from Zimbabwe is also known as Mtorolite or Mtorodite.

Chert – A hard and fine-grained rock composed of microscopic Quartz crystals that was formed by silica-rich biogenic sediments, normally of ocean floors.

Chrysoprase – A variety of Chalcedony coloured green by the presence of small quantities of Nickel.

Fire Agate – A variety of Chalcedony known only from Mexico and southwestern United States. A volcanic stone with a beautiful and iridescent fire-like effect.

Jasper –  A term variably used and often incorrectly applied to many stones. Jasper is an opaque microgranular Quartz, mainly Chalcedony, variably coloured due to the influence of other minerals present during the silicification process of sediments.

Orbicular Jasper – A spherulitic variety of Chalcedony, a name given to highly silicified Rhyolite that has Quartz and Feldspar minerals crystallised into dense radial aggregates of needle-like crystals forming orbs.

Pietersite – A variety of Chalcedony with embedded fibres of Amphibole minerals with varying degrees of alteration. A rare mineral with a similar chatoyancy to Tiger’s Eye, variable in colour from yellow, brown to blue.

More crystals, stones and minerals you may love 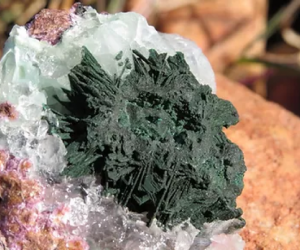 The name Ice Cream Quartz has been given to these beautiful specimens; the variously coloured Copper minerals and the icy Quartz crystal druse gives a collection of these specimens the appearance of ice cream. 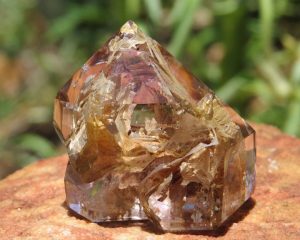 The name Asylum Quartz has been given to this truly amazing variety of macrocrystalline Quartz. Asylum, literally for “crazy quartz”, because of the amounts and number of various and unusual inclusions found in these specimens.